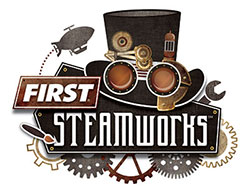 FIRST STEAMWORKS, the 2017 FIRST Robotics Competition game, invites two adventure clubs from an era in which technology relied on steam power to prepare their airships for the ultimate long distance race.

Each three-team alliance prepares to take flight in three ways:

The adventure club with the highest score at the end of the match is best prepared for the race and wins.